My claim that Seattle is the Geek Capital of the World grows stronger all the time.

We currently have the King Tut Exhibit at the Science Center.
Our Science Fiction Museum is about to open an Icons of Science Fiction Exhibit.
And we have a growing battle between a Real Life Superhero and a Real Life Supervillian.
And I will be writing about all of those in the future.
But today rather than the future, I would like to talk about the past. Because if you want to know why Seattle is so prone to generate geek culture you have only to look to its History.
It is a history of conflict, con-artistry, sex, booze, political intrigue, violence, legal maneuvering, and a suspicious fire. I am at a lost as to why so far I can only find two cases where Hollywood has used that history in screenplays.
There is no way I am going to cover all of Seattle’s great history in this post. But I will highly recommend three books if you are so inclined. The first is Sons of the Profits by Bill Speidel. If you want to really understand Seattle’s history for just how entertaining it is, this is the book for you. Its tone is light, and points out how the fate of the region turned on a dime….or a nickel, or however much they could make.
Speidel also wrote Doc Maynard: the man who invented Seattle which covers the history of one of the key city founders. Finally Skid Row by Murray Morgan, and yes, that term was coined in Seattle.
So what are the points of interest that make Seattle history great?
You have the feud between Arthur Denny and his party, and David “Doc” Maynard. Denny and party were Republican Methodist and teetotaler. Maynard was a Democrat and he was definitely not a teetotaler. Each settled in different parts of the area, but close enough that it was clear that Seattle would be made up of both their land.
And how did this play out. Well look at a map of downtown Seattle today. 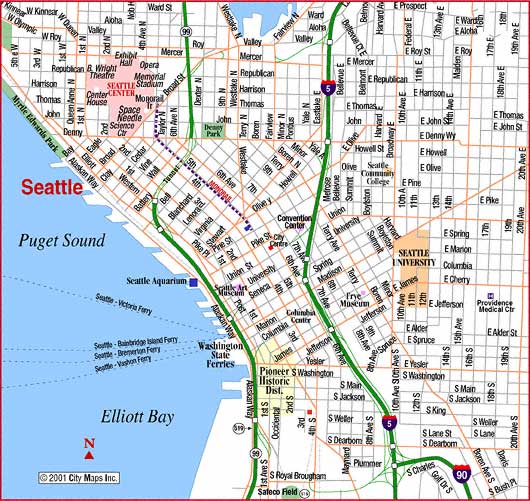 See how parts of it seem to come together haphazardly. This is the legacy of two men building up their territory with no regard to the other, and some more than healthy stubbornness.
Maynard was not well liked by the other members of the Seattle establishment for things like being a Democrat, His friendship with Chief Sealth (also known as Chief Seattle whom the city was named for) and the fact that he made several business deals designed to boost the city rather than line his pocket. Seriously there is a movie in there.
Denny and friends also objected to a theory of Maynard’s about what was needed to help a frontier town grow. Maynard had a hand in the development of Cleveland OH. One of the lessons he learned there was one way to help an area grow was to promote prostitution. To this end he encouraged one John Pinnell to set up shop. He also worked with Mary Ann Conklin AKA Mother Damnable in setting up her brothel. Just to be clear neither Pinnell nor Conklin set up the infamous Seattle Seamstresses union. That was Madam Lou Graham who was after Maynard’s time. Graham however did use her profits from the “Seamstresses” to help finance much of Seattle’s turn of the Century development.
A counter point to all this fun and games was Asa Mercer. Mercer understood the basics of Maynard’s theory, that in a frontier town the men get lonely and female companionship helps them and in turn helps the area. Mercer had a different idea how to go about it. Between 1864 and 1866 Mercer made two trips to the east coast to recruit women to come back to Seattle to find husbands. He managed to bring 46 women to the area. If your family has roots in the Pacific Northwest going back several generations, you have over 70% odds of being descended from the Mercer girls. A 60’s TV Show Here comes the Brides was based on this story.
Oh and there was that fire.
On June 6th 1889 a fire broke out that would claim 32 city blocks. Despite the damage only one death was reported, a boy James Goin, and there is some dispute if he actually died in the fire.
No one is sure what caused the fire, the story of it starting in a paint shop were just rumors at the time. But what is sure is that it was the best thing that happened to downtown Seattle.
You see downtown Seattle was basically built at sea level. This was great for the lumber mill, but not so great for the businesses, as every high tide the toilets would flood, amongst other problems. When the city was rebuilt after the fire it was built up higher avoiding the flooding. There was also a economic boost from the jobs the reconstruction created. While there is no evidence that the fire was set deliberately, that fact that it was more blessing than curse does lead to some speculation
This also led to a Seattle having an interesting tourist attraction. The series of Underground passages and basements have come to be known as the Seattle Underground. Just think about an area like this, and then consider what must have gone on during prohibition. And do not ask my sister and I what we may or may not have done during our misspent youth. If you visit the area you can take a tour of the safer parts of this. The Seattle Underground was used as a major plot point in the TV movie The Night Strangler staring Darrin McGavin, which was a sequel to the Night Stalker.
And all this is just the tip of the iceberg. Look at this and tell me that there is not a movie or HBO series just begging to be made.
For me this weird clash of uptight moralism, hedonism, profiteer and roguish behavior set the stage for the geek friendly city that I call home.