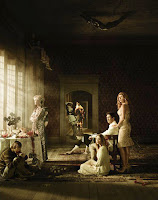 Last weekend I finally scored DVDs of Frankenstein, Dracula, and the Wolfman. These are the digitally remastered Universal 75th Anniversary series from 2004. I have wanted them for a while. I still need to get the Mummy, Invisible Man and Creature from the Black Lagoon to complete the set.
You see this is all part of a grand scheme.
I grew up a huge horror fan and this was a major part of my development into the fanboy I am today. I remember watching old horror movies, sometimes between my fingers or hiding behind the coach. The advantage of growing up before the cable network explosion, I could watch the classic on the old creature feature shows on the local TV stations.
And there was nothing better than the classic Universal Monsters.
So my plan is to start a periodic series of reviews of Classic Universal Horror.
For those not as familiar with what I am talking about, here is a primer.
The Universal Horror era is largely acknowledged to have started in 1923 with the release of The Hunchback of Notre Dame. When it ended is up to some debate, but I say it was 1958.
Universal Studios was a struggling company in the early 20’s. I won’t get into all the details here but one of the things that saved the studio was signing Lon Chaney. The legendary man of a thousand faces became a huge draw for the studio. His performance and make up design for the Hunchback of Notre Dame thrilled audiences who had never seen its like. He followed it up with other great horror films such as The Phantom of the Opera and London after Midnight.
Besides Chaney’s films Universal also had success with The Cat and the Canary and the Man who Laughs. The latter has added fanboy significance as its main character Gwynplaine served as Bill Finger’s chief visual inspiration for the Joker.
One point of interest is that during the silent era none of Universal’s horror films had any actual supernatural elements, in fact no film from Hollywood did. They either featured characters that were disfigured or someone that was employing trickery to appear supernatural.
That all changed in 1931 with the release of two films that changed film history, Dracula and Frankenstein. Now the supernatural and the inhuman were fair game.  Both films launched horror franchises and made stars out of Bela Lugosi and Boris Karloff. The next two years saw the release of the Mummy and the Invisible man.
The next great horror franchise did not come about until 1941 with the release of The Wolf Man Starring Lon Chaney Jr. With this the trinity of Universal horror was complete. To this day Frankenstein, Dracula, and the Wolf Man are ingrained images as horror icons, forever associated with Karloff, Lugosi, and Chaney.
Throughout the 30’s and 40’s Universal set the standard for the horror genre, creating many of the tropes that have come to be associated with it. Creaking staircases, Cobweb infested castles, fields filled with mists, the secret passage behind the bookcase and mobs with pitchforks and torches, all were introduced, or at least made popular, by Universal.
By the end of the 40’s Universal’s desire to milk every last drop out of their horror franchises seem to have spelled the end of them. The release of so-called Monster Mash movies where Frankenstein’s Monster, Dracula and the Wolf Man all appeared, while still popular, seemed to be the final curtain for the classic monsters. With the release of Abbott and Costello Meet Frankenstein the trinity of horror icons was retired.
But Universal Horror was not done yet.
In 1954 the last great Universal Monster was unleashed, The Creature from the Black Lagoon. A total of three Creature films were made in the 50’s.
However even the coming of the gill-man could not keep the franchise going and with the release of Monster on Campus in 1958 the Universal Horror era ended.
But the influence did not.
Think about it, when someone says Frankenstein, what image comes to mind. I’ll bet it isn’t the creature design Christopher Lee wore in the Hammer Horror films, or Robert DeNiro’s version.
Our expectations of these iconic characters have been formed by Universal and are the widely accepted version.
And Universal has not forgotten this. They make periodic attempts to revive the Universal Horror franchises.  While none have been the restart the studio hopes for, one cannot help but figure it is just a matter of time.
Add to that the fact that every Halloween Universal Studio’s theme parks host their Halloween Horror Nights event where the parks are turned into massive haunted houses. My wife and I attended the 20th year of the event in Florida. It was one of our best vacations ever and proved why we are the perfect match (I’ll cover that adventure another time.)
Universal is still the name that will forever be associated with classic horror.
Going forward I will start the actual reviews of specific movies. In these reviews I will go over what makes the movie work, what are its flaws, how well they hold up over time, and what influences it has had on pop culture. These will be spaced out as I need time to review the movies and I don’t want them to dominate the blog. Also I need to track down copies of more of the Universal Horror catalog.
But I will leave you with this, first up will be Frankenstein.