The final day of a convention can be a bitter sweet affair. You have had a great team, you will miss all the experiences, and you are exhausted and just want to get home and soak your poor abused feet.

I only attended two panels, the Summer Glau and Adam Baldwin panels. The Browncoat in me required it. They were fun panels. Summer is obviously a sweet girl and was adorable on stage. Adam is an old veteran who knows how to connect to the crowd.
I spent the rest of the day checking out booths I had not gotten to previously and catching up with old WotC colleagues I had not seen in a while. Towards the end of the day I ended up helping out at the booth my wife was vending at. This led to my awesome moment of the day.
One of the items my wife makes is a bracelet with a heat sensitive stone like an old mood ring at the center. A little girl about 4 or 5 years old was with her parents at the table and I encouraged her to touch the stone. As the stone turned color I could see the gears in her head start working. She was trying to figure out how I was making the color change. She keep looking at her had expecting ink. And she was not going to take this nonsense I was telling her about science and body heat. Somehow I was making the green stone turn blue and she was going to work it out.
And before I give you the tally of today’s cosplay I want to share a revelation I had. My identifying and recording the various costumes I saw was basically the fannish equivalent of trainspotting.
And with that thought firmly in place here are the results for Sunday.
·         Superman: 7 finally knocking Doctor Who out of the top spot.
·         Doctor Who: 6
·         Captain America: 4
·         The TARDIS: 3
·         Supergirl: 3
·         Spider-man: 3
·         Riddler: 3
·         Power Girl: 2
·         Green Lantern: 2
·         Robin: 2
·         Harley Quinn: 2
·         Joker: 2
·         Poison Ivy: 2
·         Wonder Woman: 2
Tomorrow I will do the final review of the convention, after I get a good night’s sleep. 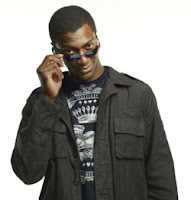 This is the catch phrase of Alec  Hardison on the TV show Leverage. Hardison is a hacker and self-professed fanboy. His catch phrase is an assertion that the future belongs to geek kind as we have the skills that will prevail in the 21st century.

I of course agree and will take it a few steps further.
There is an underlying power in geek culture that is both awesome and terrifying.
Don’t believe me, well let’s take a look top ten box office movies of all time according to IMDB
1.       Avatar
2.       Titanic
3.       The Dark Knight
4.       Star Wars
5.       Shrek 2
6.       E.T.: The Extra-Terrestrial
7.       Star Wars: Episode I- The Phantom Menace
8.        Pirates of the Caribbean: Dead Man’s Chest
9.       Toy Story 3
10.   Spider-Man
Of those I would only exclude Titanic as a geek movie, and I know people who would argue with me on that. And as you continue on the list you have to get down into the hundreds before geek film dominance relents.
Want more proof?
10 years ago FOX broadcasted a short lived TV Series called Firefly. To this day fans hold out hope that it will come back. Enough hope that Firefly merchandise still sells. It’s an example of the idea that once you have the backing of the geek community you have it forever. Firefly star Nathan Fillion acknowledges and embraces these fans and they helped make his new show Castle an initial hit and gave it time to find a broader audience.
And of course there is that other failed TV show. You know the one with the spaceship and the Vulcan. What ever happened to that?
The geek vote can be a powerful thing and its good will can bring great success.
And of course there is the dark side to it.
How could a bunch of geeks cause harm? Let’s ask Paul Chrisoforo about that.
Mr. Chrisoforo runs a company called Ocean Marketing a social media marketing firm that also had an account to distribute a specialty game controller. A man who bought the product for Christmas hadn’t received it and contacted Ocean Marketing to find out why. To say the response he got was rude would be an understatement. You can read the entire exchange here. Go ahead, I’ll wait.
Back yet?
As I’m sure you saw, Mike Krahulik of Penny Arcade got involved.  That led to the Penny Arcade community getting involved. And that led to the geek community as a whole getting involved.
So it went from Chrisoforo telling Krahulik on Monday night to expect a call from his lawyer to Chrisoforo begging Krahulik on Tuesday morning to make it stop. The internet basically rose up as one and attacked.
Is this an isolated incident? On this scale maybe, but ask anyone taken down by Anonymous or Lulsec if geeks are easily dismissed.
Just this last week we saw another example when the online protest of SOPA and PIPA took these bills from looking like a sure thing to pass to being on life-support.
The moral of the story?
“Age of the Geek, baby.”