Recently I have been writing about the issues DC Comics has been having with keeping its top talent. Previously it was the high profile departures of George Perez and Rob Liefeld. Both men left due to conflicts with the editorial staff. Then you had the resignation of Karen Berger as Executive Editor of the Vertigo imprint. In her case it may just be that she has done the job for twenty years and it is time for her to move on.

Now you can add the dismissal of Gail Simone to the list. This one more than any of the others is really setting of alarm bells amongst the fan base.

Unlike any of the others writers I mentioned, Simone was dismissed. Specifically she received an email from editor Brian Cunningham telling her that issue 16 would be her last issue of Batgirl. Since that was the only title she was currently working on this was basically her dismissal. Now of course she was rehired not two weeks later, but we will look at that and what it means in a bit.

There can be a lot of good reasons to dismiss a creator from a comic book, but none of the obvious ones are visible in this case. Batgirl is a strong seller compared to many DC books right now. In addition Simone has received critical praise for her run on the title. Another point in her favor is that she is a fan favorite author meaning a lot of people will pick up a book she is writing simply because she is the one writing it. Simone is also an advocate for DC and the new 52, promoting it heavily over social media and at conventions. Finally there is a PR factor; Simone is one of only three female creators currently working on DC titles. Since this is an area that DC has already received a great deal of criticism for, it is a risky move to remove the most high profile female creative talent they have.

So with so many positives in her favor what could have motivated DC to remove her? Right now we have no solid answer as DC has made no comment at all about either the dismissal, or the reinstatement. So we can only speculate as Simone herself has opted to take the high road.  On the dismissal she simply stated that she is disappointed to no longer be on the book, but made no comment about any other circumstance. On the reinstatement she just stated how happy she was to continue working on the title.

However if you look at this as part of a trend a picture does begin to emerge. Starting with the departures of Perez and Liefeld that I have commented on before, which both men cited conflicts with DC editors. Next you have stories of regular last minute changes to stories that have been turned in, with plot elements being added against the writers will. What we are hearing more and more of is editors dictating the stories that need to be written, making certain characters off limits, and making others mandatory. We also hear of editors getting into turf wars with each other. Finally we hear of writers being kept in the dark about plans for the characters they are writing, such as Simone not being told that Batgirl would be joining the Birds of Prey in their title.

I find Berger’s departure at this time interesting as well. She has been in charge of Vertigo for 20 years, and guided it during a period of amazing creativity.  Books that thrived under her tenure and guidance include Sandman, Fables, Preacher, Y the Last Man, The Invisibles, Swamp Thing, Hellblazer and Transmetropolitan. I’m sure there is a good chance that she just decided that 20 years was enough and it was time to step down. On the other hand, after so many years maybe she recognized something going on at the company that made stepping down now a good idea.  Trust me other companies would fall over themselves to hire her, and she would be in an excellent position to grab any talent leaving DC.

And talent leaving the ship is another sign of something wrong. In March Marvel has books coming out featuring creative talent that has been working strictly for DC up to now. That could be a group of creators simply expanding out, or it could be them getting set up elsewhere before it is too late.

But let’s get back to Gail Simone. There are certainly rumors going around about what happened, some based on the conjecture above. Basically the best guess right now was that Simone was not making the DC powers that be happy. She had her own ideas how she wanted the stories to go, and she wanted to push the envelope. She had been clear about wanting to introduce a transgender character to the Batgirl title. Also despite her hard work in promoting DC and the changes she is still one of the strongest advocates for better treatment of women in the industry, both as characters, and the flesh and blood ones working on the books. The best conjecture we can make is that one or more people higher up in the DC power structure decided they wanted her gone, and so that is what happened.

Was this a bad idea? Yes, it was an amazingly bad idea. This more than anything else shows that all is not well in the halls of DC comics. And even if they try to keep this lower profile with the fans, the talent is going to know what is going on. The worst case scenario for DC is that the really good creators jump ship, which will affect the quality of the books and ultimately sales. Add to that pressure from vocal fans about what DC is doing and it does not look good for their long term prospects.

I think that last part, the pressure from the fans, is what led to the decision to bring Gail back. Convention season is just around the corner. Fans have already been in an uproar about a lot of DC decisions. The public reaction to firing Gail Simone made all of that pale by comparison. I promise you that had she not been rehired that every panel at every convention would have asked what the hell is going on.

As a fan I sincerely hope I am wrong in these speculations. I grew up with DC comics and I want them to thrive.  But right now things I am seeing have me concerned. But I also have hope. The fact that fan outcry got Gail Simone rehired means we do have a voice. If we can use that to let DC know how we really feel about things maybe it will all work out.

I have a feeling the next couple of months will be telling. 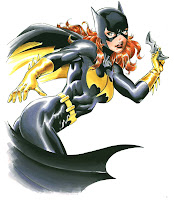