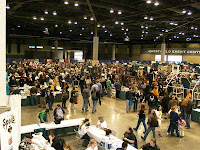 Ah, conventions. That time when those of us that make up geek culture can come together and celebrate. In the next two weeks there will be three fan conventions in my area. Easter weekend is huge for conventions here in the Geek Capital of the World.

As such it seems fitting to devote some time to this center piece of geek culture.
If you have never been to one it can be a bit daunting the first time. It’s not like a trade convention where people come to see the new products and get tips on how to sell next year’s new vacuum. I am talking about fan conventions.
The first thing to clarify is that not all fan conventions are alike. The three upcoming are considered different genres. So when I say a convention is a fan convention it could be any of the following either as a single focus or some thematic mix:
·         Science Fiction
·         Anime
·         Comic Book
·         Horror
·         Filk (think folk songs with a geek twist)
·         Steampunk
·         Tabletop Gaming
·         Computer Gaming
·         Costuming
·         Specific Fandom (Star Trek, Firefly, Buffy, etc…)
·         Specific mythology (often fairy based, but others can happen)
With all this diversity these events all have one thing in common. People have a chance to come together and mingle with others who share a specific interest.
So if you are going to go forth and attend a convention here are some tips.
First is what has come to be known as the 5/2/1 rule. It is a straight forward rule to ensure your health and well-being as well as making sure others will still want to be around you. The rule is simply this; every day of the event you need to have a minimum of 5 hours sleep, 2 full meals, and 1 shower. Really just basic maintenance but during an event when you want to cram in as much as possible it becomes surprisingly easy to miss these.
Also keep in mind that you are going to be in a limited area when a lot of people. It is not uncommon for illness to spread in these conditions. We often call this “con crud.” I recommend that during the event pay attention to health details like washing your hands. Also taking a multi vitamin during this time is not a bad idea.
Besides health issues, the other thing to keep in mind is the social aspect.  Yes, you are in a place where you are surrounded by people with a shared interest. This does not free you from normally accepted social behavior.  Trust me when I say that being polite and remembering personal boundaries is still important.
The flip side is to remember that other people are there to have fun too. If someone is indulging in a part of fandom you do not participate in, such as cosplay or gaming, remember it is important to them and be respectful.
To sum this up, as one person once taught me, at all times keep your brain with you.
On a personal front, I will be attending Emerald City Comicon this weekend March 30 through April 1. I will be taking notes during the show a will try to have short updates here every day. I will also be tweeting from the show, my tweeter is @caliban1227.
The following weekend I will be at Norwescon, I will probably still tweet, but I probably will just do a single write up following the con.