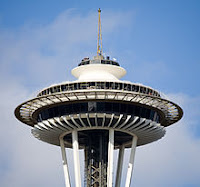 I am a proud resident of the Seattle area. I bring this up because I now live in the only state in the union that does not have any form of state sponsored tourism marketing. The State Government is encouraging private business to advertise our state’s virtues instead.
(I want to preface this with the statement that I do not make any income from anything related to tourism.)
I think that we here in the Seattle area have a potential for tourism that could be tapped. Appeal to geek culture.
One week a year the center of geek culture is San Diego California. I say we make a play for the other 51 weeks a year.
We have a head start. In Seattle we have the Experience Music Project and Science Fiction Museum and Hall of fame. We have Seattle Pioneer Square with the Seattle Underground tour.  We have the original Game Works. We have PAX which is becoming, if not has become, the major convention for gaming, electronic or otherwise. We have Emerald City Comic Con, a fast growing comic book convention. We are the home of corporate headquarters for Amazon, Microsoft, Nintendo America, Wizards of the Coast and I Can Haz Cheezburger. The number of gaming companies of all sizes in this area is in triple digits.
So how do we do it?
Well first all those groups I mentioned above? They need to get together and start promoting Seattle as the place where geek culture comes from.
Next someone would need to build something that would be a year-round destination for the geek fans. Anyone remember the Star Trek Experience that used to be featured at the Las Vegas Hilton? Something along those lines that, but where it is the center piece of a whole center, maybe a resort.
Someone is thinking this is a good idea. In 2014 a Star Trek theme resort will be opening in Aqaba, Jordan. Now I don’t know about you, but even though I would love to go to a Star Trek resort, I do not see myself traveling to Jordan to do it.  I could see people coming to Seattle to see it however.
Or how about a hotel that had rooms that were rigged to simulate being haunted. As long as I have the ability to turn off the effects when I want to I think that would be awesome, and could be a big draw every October.
However none of this would be a sure bet. In 1997 The Wizards of the Coast Game Center opened in the heart of Seattle’s University district. It was a complex dedicated to gaming and included a game shop, video arcade, a network of computers for LAN gaming, a tournament gaming area, and a twelve pod Battletech combat simulator. A gamer’s dream come true. It closed its doors just four years later. There has been a lot of analysis of what went wrong. Although mismanagement is the likeliest culprit, It stands in people’s minds are a failure of a geek centric venue being able to draw people in.
But does that mean no one should try again? Paul Allen didn’t think so when he opened the Science Fiction Museum and Hall of Fame in 2004. Housed in the same building as the Experience Music Project, the Museum is a collection of Memorabilia such as the Original Star Trek captain’s chair, and exhibits like the current Battlestar Galactica and Avatar exhibts. It also hosts the Science Fiction Hall of Fame and Science Fiction Fantasy Short Film Festival in association with the Seattle International Film Festival. True it was folded into EMP last March, but it is still effectively a going concern.
Maybe we need to start a meme. “Seattle, Geek capital of the world.”