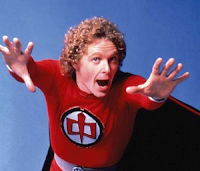 With the release of the movie Chronicle I am pleased that a cliché was avoided. Not that the movie is free from them, let’s face it, it is a found footage movie, but there is one I am glad it avoided. (At least I think they did, I haven’t had a chance to go see it yet. I know “Bad Fanboy”)

It’s a movie riffing on superpowers and superheroes where the characters powers are not based on Superman.
Think about it for a minute, name a superhero movie not based on a pre-existing superhero property where the hero’s powers were not basically Superman’s. Seriously the only one that I can name off the top of my head is the Toxic Avenger and I’m not sure he counts.
When I say Superman based I am talking about the following specific powers:
Super strength
Flight
Invulnerability
Other powers will often be present as well, but those three seem to be universal.
I’ll admit that there are a lot of superheroes in comics have these powers and are not considered rip offs of Superman. Rogue of the X-men, the Martian Manhunter, and Thor spring immediately to mind.
But most of the characters I am talking about are clearly taking their cues from Superman.
Now to be fair Superman is a cultural icon and the first image to enter people’s minds when the term superhero is used.  But all that tells me is that a lot of screenwriters are lazy. (Let’s all pretend to be shocked). So I guess for most people not immersed in geek culture Superman is synonymous with superhero.
And in most cases these portrayals are exploring ideas that you couldn’t with Superman himself. Superman is the paragon of superheroes. He is confident, noble, and humble. Often these pastiches are exploring ideas that would not fit with those qualities.
Most often you find the story to be about an ordinary person leading an ordinary life suddenly finding themselves with superpowers.
In the sixties you had two competing TV comedies, Mr. Terrific and Captain Nice, which had heroes who gained temporary powers based on a secret formula.  While similar ideas both had different execution. Mr. Terrific worked for the government who supplied the super pills that only seemed to work on him. Most episodes had his powers run out at the worst possible time. Captain Nice was a police scientist (no one said forensics back then) who invented a formula that gave him powers. Most episodes were about him needing to get to his formula in order to save the day. The other big difference in these shows was that Mr. Terrific was awkward with his powers, where Captain Nice could handle them, but was stuck with a ridiculous costume his mother made.
Moving on to the eighties and you had the Greatest American Hero, about a school teacher given a superhero costume by aliens that gave him superpowers. Like Mr. Terrific he had poor control over his abilities. The appeal of this show was the buddy cop aspect provided by his FBI friend/partner.
All these shows while having some fun with the everyman superhero idea suffered from the same problem, a problem that all TV shows featuring a super powered hero, be they from a previous license of not, suffered from. Almost none of the antagonists had superpowers. So really none of them ever really had a comic book feel to them, but more of a superhero in the real world vibe.
Movies didn’t always fare much better. You had parodies, like The Return of Captain Invincible. This was a movie where a hero from the 50’s is disgraced and becomes an alcoholic bum. He is found and has to clean up his act in order to save the world from his arch enemy. It was low budget fluff, even if it did have Christopher Lee as the bad guy.
There was a terrible Italian movie called Puma Man. Yes, Puma man.  His powers were Puma based yet somehow they still made him a Superman Pastiche. His powers were even of extraterrestrial origin. If you heard of this one at all it was because Mystery Science Theater 3000 got their hands on it.
In 1993 there was Meteor Man, which sadly really wasn’t more than Greatest American Hero with an all-black cast.
More recently there was Hancock with Will Smith. To the writer’s credit instead of having a movie about an everyman with powers, it went with “What if Superman was a drunken asshole.” What was nice was they did dig a bit into the characters psychology to given him a reason for being that way and made it a redemption tale.
And there are certainly exceptions. The Incredibles for example was more of a riff on the Fantastic Four.
Sometimes Warner Brothers, who owns DC comics, thinks that these shows get a little too close to their copyright for comfort. For example WB sued over the Greatest American Hero. Ultimately lost as the court felt the character wasn’t close enough to Superman to warrant a violation, even with nearly the same powers.
Of course there are the non-powered heroes, but that could be a whole article on Batman pastiches. (And probably will be)
Will we see more Superman pastiches in the future? I don’t see why not.  Until then I think I will get out there and see Chronicle.

1 thought on “I can’t believe it’s not Superman”