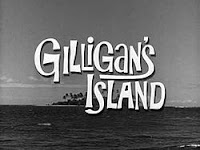 Let’s do something a little different today. Let’s play the game of Alternate Interpretations.

To play the game you take a book, TV show, or movie that everyone knows. You then need to supply an underlying back story that is different from what is the usually accepted one. And to top it off it needs to work without changing what actually appeared in the original, acting as subtext.

So let’s use something everyone knows, Gilligan’s Island.

We all know the story of the seven castaways shipwrecked on the deserted tropical island. But what if there was more going on.

In 1964 the U.S. Government decided that it needed to make several people disappear for various reasons. However it did not want these people dead in case any of them were ever needed. An ambitious plan was hatched to strand them on an uncharted tropical island. The plan hinged on them not knowing that this was deliberate and if they did figure out that they were there on purpose they would not realize the others were as well.

But why did they need to vanish?

Captain Jonas Grumby aka Skipper: Grumby was a US Naval officer who had come across damaging information about the Kennedy family while serving under John F Kennedy during World War II. If what Grumby learned was ever made public it would end the Kennedy family political dynasty. After he retired from the Navy the government was able to arrange events so that he found himself the owner of a small boat charter company in Honolulu, Hawaii.

Professor Roy Hinkley: Hinkley was a genius botanist and chemist who worked on a project on mind altering chemicals that was funded by the CIA. It was part of larger project involving behavior control. Unfortunately for Hinkley he was smart enough to deduce the real purpose for the project. In disgust he quit, and took a job as a high school science teacher while he decided what he wanted to do about what he had learned. While this was going on he received an offer to join a botanical study in Hawaii. One of his fellow researchers suggested he might find it interesting to take a charter cruise out of Honolulu.

Thurston and Eunice Howell: Thurston Howell the 3rd was an old money robber baron. Major parts of his holding were in arms manufacturing. In the wake of the assassination of President Kennedy and the ongoing war in Vietnam Howell was having a change of heart about this part of his business. This would not do, but he was powerful enough that no one wanted to risk his death. He was brought to Honolulu by his government contacts to discuss what his plans were. After a particularly taxing meeting he was convince to take a break, perhaps a three hour boat tour.

Mrs. Howell was just what she seemed, an aging socialite who was accompanying her husband.

Ginger Grant: Grant was a well-known actress and singer. She was also having an affair with a high ranking Politian whose pillow talk let her know more than was good for her. In the wake of the death or Marilyn Monroe it was determined that adding her to the ill-fated boat tour was the best way to deal with her. A surprisingly well paying musical review in Honolulu was offered to her.

Mary Ann Summers: Mary Ann was a simple farm girl from Winfield, Texas, or so she would have had you believe. In reality Mary Ann was a deep cover KGB sleeper agent. The government learned of the Soviet Operation she was part of and knew they would be making their move soon. Realizing that taking out a key member of the KGB’s team would lead the operation to being aborted. However they wanted her alive in case they ever had need of a spy for a show trial. It was arranged for Mary Ann to win a trip to Honolulu complete with a three hour charter boat cruise. Mary Ann could not skip the trip without raising suspicion so she went. Of all the castaways she is the one that harbored some suspicion of what is really going on, but can’t reveal it for fear of breaking her cover.

William Gilligan: Gilligan was a highly trained intelligence operative for the US Military. When the government learned that Jonas Grumby had information that could topple the powerful Kennedy family Gilligan was assigned to get close to him and learn what he knew. Adopting a persona that was bumbling but sincere, Gilligan was able to make Grumby accept him as a friend and confidant. When Grumby retired Gilligan joined him and was able to manipulate him into buying a boat charter in Honolulu.

He was able to Sabotage the boat in such a way that it appeared out of control during the storm the government had made sure was not reported.

Once on the island it was Gilligan’s mission to make sure no one suspected why they were really on the island, and that no one ever left.

Now go watch some episodes of Gilligan’s Island and see how they play out now.